Roof Works to the Cottage Extension

Members of the Trust have been busy this week replacing the old and rotting timbers supporting the tiled roof to the cottage extension.

Erected in the latter half of the 20th century, the extension’s roof has been prone to leaks for some time and was visibly sagging in places. Les Mitchell, Dave Start and Dave Mason removed the tiles and underfelt to reveal the extent of the problem.

New joist ends have been cut and bolted on, wall rails repaired and two new joists fitted. New underfelt has been fitted and the roof battens replaced with new. The tiles have been cleaned and will be in place by the end of this week. 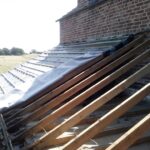 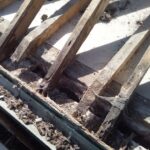 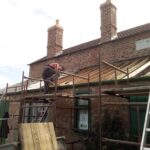 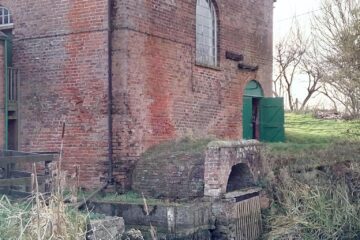 The work to rebuild the scoop wheel inlet tunnel is to start in the next few days. The builders will dismantle the collapsing tunnel and rebuild, before increasing the height of the concrete retaining wall Read more… 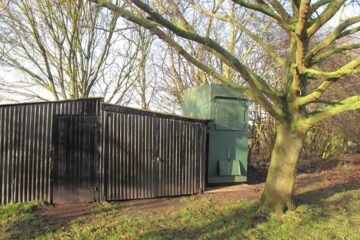 The bunded bulk storage tank for our diesel supply is now in place. The tank was generously donated to us by the Witham 3rd District Internal Drainage Board and is designed to prevent the contamination Read more…

We use cookies on our website to give you the most relevant experience by remembering your preferences and repeat visits. By clicking “Accept All”, you consent to the use of ALL the cookies. However, you may visit "Cookie Settings" to provide a controlled consent.Read More
Cookie SettingsAccept All
Manage consent

This website uses cookies to improve your experience while you navigate through the website. Out of these, the cookies that are categorized as necessary are stored on your browser as they are essential for the working of basic functionalities of the website. We also use third-party cookies that help us analyze and understand how you use this website. These cookies will be stored in your browser only with your consent. You also have the option to opt-out of these cookies. But opting out of some of these cookies may affect your browsing experience.
Necessary Always Enabled
Necessary cookies are absolutely essential for the website to function properly. These cookies ensure basic functionalities and security features of the website, anonymously.
Functional
Functional cookies help to perform certain functionalities like sharing the content of the website on social media platforms, collect feedbacks, and other third-party features.
Performance
Performance cookies are used to understand and analyze the key performance indexes of the website which helps in delivering a better user experience for the visitors.
Analytics
Analytical cookies are used to understand how visitors interact with the website. These cookies help provide information on metrics the number of visitors, bounce rate, traffic source, etc.
Advertisement
Advertisement cookies are used to provide visitors with relevant ads and marketing campaigns. These cookies track visitors across websites and collect information to provide customized ads.
Others
Other uncategorized cookies are those that are being analyzed and have not been classified into a category as yet.
SAVE & ACCEPT
Powered by